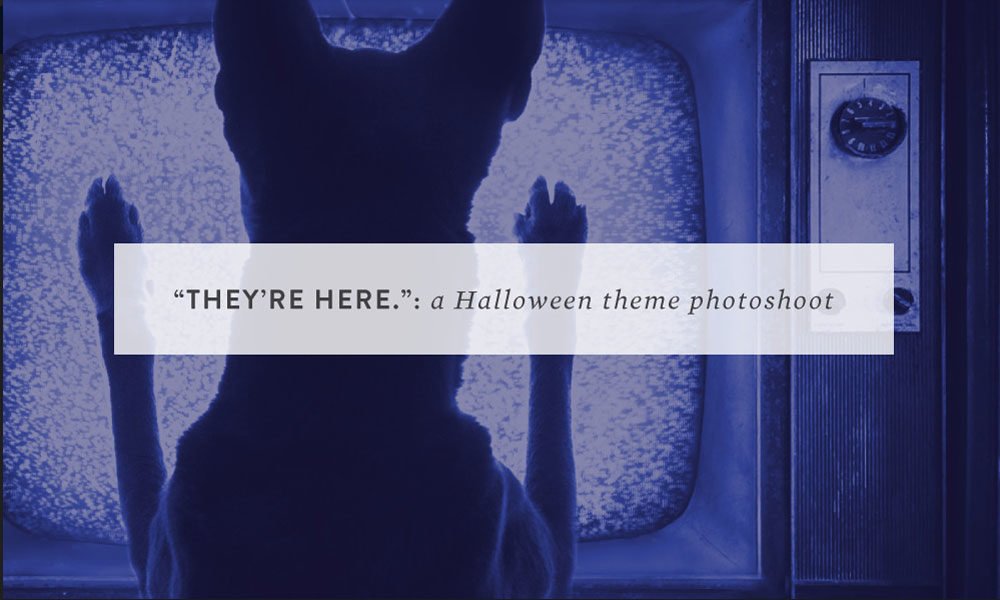 Hello Halloween fans! It has been a spooky year to say the least, with all the current events taking place around the world, wouldn’t you say?
In spite of reality often being scarier than fantasy, year five of our Halloween theme passion project could not go unmarked. So, here we are.

This year, we pay homage to all of us kids who grew up in the 1980’s who were terrified (ahem! me) or entertained (ahem! Bill) by a 1982 film called Poltergeist. If you have not seen it, or if you don’t know what “They’re here.” refers to, head over to Netflix and add it to your list.

This year, Bill takes the cake. Start to finish, this year’s shoot was brainstormed, orchestrated, directed and brought to life by him. I confess when we talked about the idea, I felt the hairs on the back of my neck raise a bit, because that movie terrified me as a kid… especially because my older brothers would tease that I looked like the little girl in the movie (*shivers).
But it sounded like a killer challenge and fun project, so we went ahead with it.

Stylistically and logistically, it was a fairly simple shoot. All we would need would be an empty carpeted room, a teddy bear, an old television set and a willing Willow to put her paws on the screen.
Since the TV was going to be tough (and expensive) to procure, that part we left solely to Photoshop magic. Bill’s childhood teddy bear stepped up to play the role of… erm, the teddy bear and our guest room proved to be the perfect space to shoot the scene.

For the glowing screen, we got two thick sheets of plexiglass and we covered them with a white fabric. They were propped up safe and solid like a wall and we put a continuous light behind them. This would give us the glow we needed on Willow. 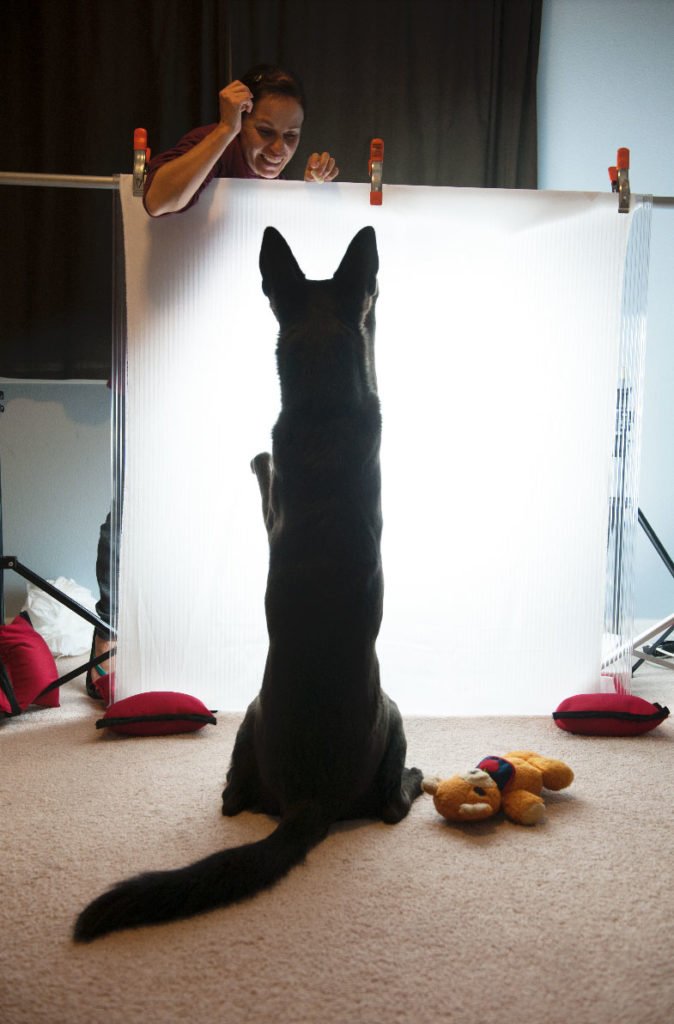 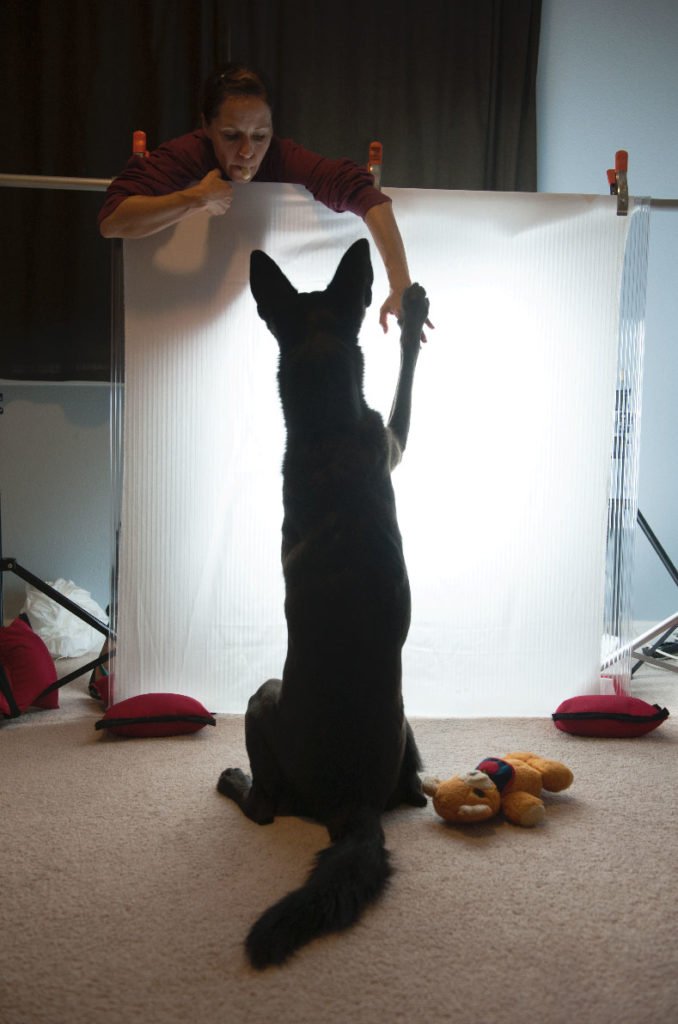 Willow is familiar with tricks like “sit pretty” and “paws” (which means, put your paws on whatever I point to), but for this shoot, we quickly had to develop a new trick combining those to tricks. Sitting pretty and placing her paws against something and holding them there for a few seconds. First, we practiced by her putting her paws up on my belly. This worked well because then I ended up putting the white screen in between us. However, this presented its own challenges. Willow’s paws kept slipping from the screen (understandably so), with the fabric not providing as much grip as I’d hoped. So, thinking on our feet, we developed another trick. Similar to a “high-five” or “high-ten” and having her rest her paws on my hand for grip. It worked!

The final image consisted of stitching together a few images, and altering color for mood and final effect. 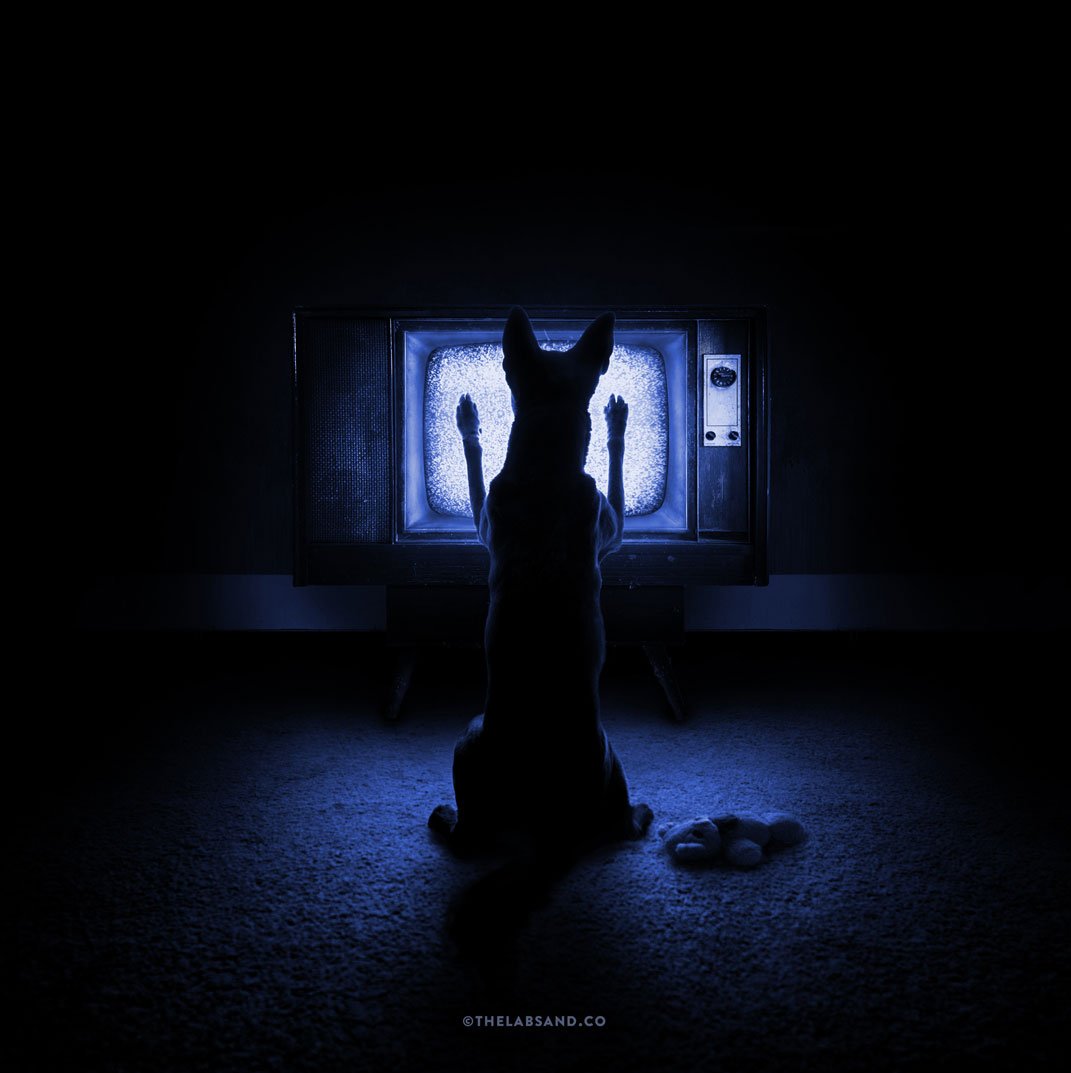 This photograph is ©The Labs & Co. All rights reserved. Thank you for sharing our work! But please be kind and give credit.